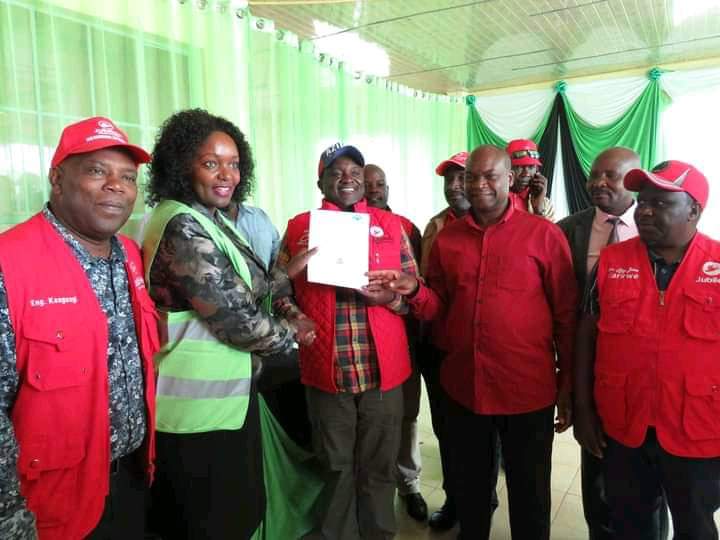 Kirinyaga Senator Charles Kibiru CK has been cleared to vie for the county’s top seat under the ruling party Jubilee which is under the Azimio La Umoja coalition whose presidential candidate is Raila Odinga deputised by Martha Karua.

Kibiru immediately promised to redeem the county from the shackles of retrogressive leadership that has stagnated both economic and social development.

He declared his win will be the win of the Kirinyaga people who had to endure many years of bad and backward leadership.

“The journey towards redeeming Kirinyaga County from the shackles of retrogressive leadership is on course. We got the green light from the electoral body and we have the mandate of our people. It will be a win for Kirinyaga people in August,” said Kibiru.

Kibiru was accompanied to the Independent Electoral and Boundaries Commission (IEBC) by his deputy designate and current deputy governor Peter Ndambiri other Jubilee candidates from the county among the Njogu Barua (MP Gichugu) and Eng Kangangi (Ndia).

He said Kirinyaga is an agriculturally rich county with a hardworking people who only require focused and right leadership to make their lives better.

On the mega Thiba Dam that is complete and filling up with water, Kibiru said it marks a milestone in rice production.

He said he was proud to have been part of the elected leadership that has been consistent in supporting the completion of the project that will have immense benefit to the people.

Urging the people to elect him, Kibiru said it was clear that the current county leadership had alienated itself from the people noting that no meaningful development can occur where the voice of the people is ignored.

He will be facing off with the incumbent Anne Waiguru of United Democratic Alliance (UDA), Independent candidate and current woman representative Purity Wangui and Narc Kenya’s Muriithi Kagai.

Kirinyaga Senator Charles Kibiru skirts around leaving Jubilee Party, says his focus is the passing of the County Grants Bill