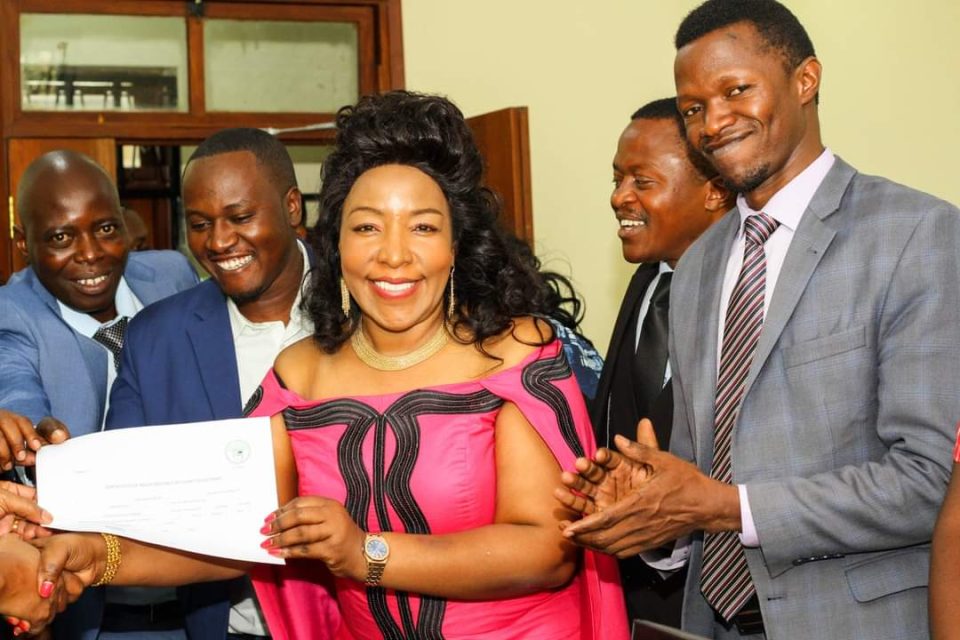 Prominent Nairobi businesswoman Agnes Kagure has been cleared by the Independent Electoral and Boundaries Commission (IEBC) to vie for the Nairobi City County’s gubernatorial seat.

Kagure who was among the first candidates to start campaigns for the seat under the Jubilee Party ticket dropped from the ruling party after the ticket was given to corporate titan and former Nairobi deputy governor Polycarp Igathe.

Igathe was given ticket following negotiations held at State House where Kagure and another aspirant Patrick Ngatia were asked to step down from the race and support the former Equity Bank senior executive.

However and despite being promised an nomination slot in Parliament by President Uhuru who is the Jubilee Party leader, Kagure rejected the offer after bowing to pressure from her supporters who urged her to go independent.

On Sunday after presenting her papers she was cleared to vie paving the way for a three-way fight for Nairobi’s gubernatorial seat featuring Igathe of Jubilee Party and Johnson Sakaja of United Democratic Alliance (UDA) led by the deputy president William Ruto.

After receiving the nomination certificate an excited Kagure declared that her dream to lead Nairobi was unstoppable and would not be deferred.

She then nominated a former adviser to impeached Nairobi governor Mike Sonko Abel Onchari Oyieyo – a youthful politician – as the running mate.

Kagure while unveiling her running mate said she was a strong believer in the youth’s potential and ability to lead and shape important policies as opposed to just being cheerleaders and goons for hire.

“He brings with him youthful zeal, insight, and commendable work experience to our candidature and the Nairobi’s incoming leadership. This is why I settled on him as the deputy governor designate,” said Kagure.

She said she was happy to be cleared by the IEBC to seek Nairobi residents’ mandate to lead the county’s transformational as governor.

Kagure thanked her loyal supporters to sticking with her even when it appeared as if she would not be on the ballot.