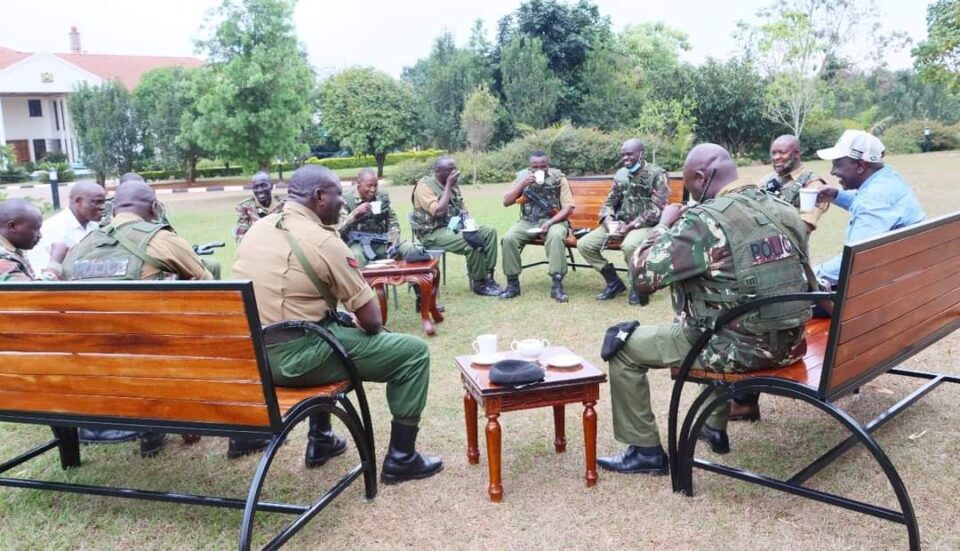 Kenyans were left in shock after it emerged that Deputy President William Ruto and his properties are guarded by over 257 police officers despite his cry that his life was in danger.

It was revealed in Parliament on Wednesday that apart from the highly trained body guards Ruto’s gas station in Kitengela is guarded by 6 officers, Weston Hotel by 4 officers and his chicken farm – Koitalel Poultry Farm Eldoret is guarded by 4 officers.

It also emerged that two hangers and five helicopters at Wilson Airport under Kwae Island Development Ltd are guarded by five police officers.

Making the revelation in Parliament Internal Security Minister Fred Matiang’i said Ruto is guarded by 121 officers while a further 51 guard his properties that include homes, hotels and farms located across the country.

Matiang’i and his PS Karanja Kibicho were summoned by Parliament following claims that Ruto’s security had been downgraded and was now being offer by the Administration Police officers (APs) leading to protests by his followers.

After initially complaining, Ruto then changed tune and said he did not care who provided his security and posted pictures of himself enjoying a cup of tea with the Aps that had been posted to guard his Karen residence.

Police had said it was APs that guard government residences and installations but Ruto body guards remained from the elite GSU squad.

Kenyans were also surprised at the number of properties Ruto has and the many acres of land he has standing at over 10,000 acres.

And Matiang’i blasted Ruto saying he was addicted to seeking sympathy and are looking for opportunities to lament over any issue.

“The problem with our country is that some people suffer from sympathy addiction. They’re always looking for opportunities to lament about this and that to attract sympathies. We in the security sector make decisions after serious considerations knowing we will be held accountable,” said Matiang’i

Moses Kuria sensationally says he will not vie for any seat in 2022, to focus on Mt Kenya unity

Raila will never form a coalition with Ruto – Gachagua.