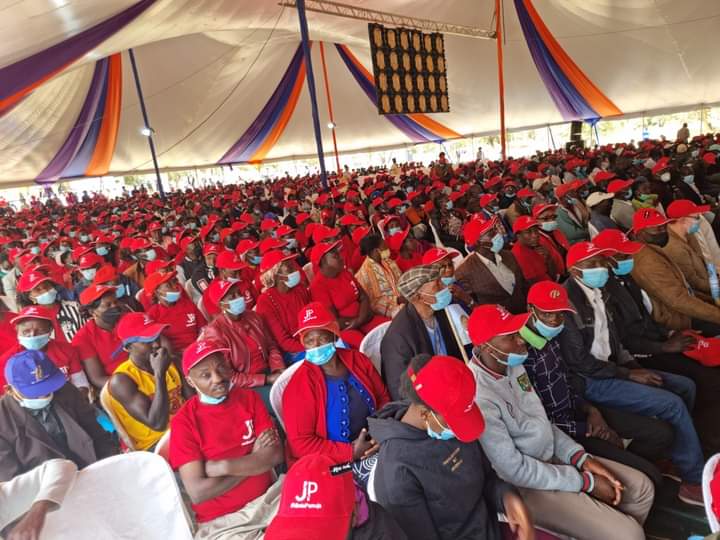 The decision by Jubilee Party to retain President Uhuru Kenyatta as its party leader has rattled United Democratic Alliance (UDA) aspirants in the Mt Kenya region who were perceived to have left the party but are now in a mad rash to join the ruling party ahead of August 9 general elections.

So far many current MPs who were perceived to have taken a middle ground awaiting President Kenyatta’s word on the raging debate on his succession have indicated they are ready to fly the Jubilee flag in the August polls.

According to political experts UDA is likely to be a major causality going forward since they feel President Kenyatta will not stop at anything in clawing back the gains the party has made in his backyard.

Kirinyaga Senator Charles Kibiru is the latest politician who has vowed to join the ruling party as sets his eyes on Kirinyaga governor’s seat.

Sources now say many current Mt Kenya MPs who have been silent on which tickets they will use in the upcoming polls have strategically positioned themselves as potential candidates through Jubilee, a constituent party in the Azimio La Umoja coalition.

Among those who have been reaching out to Jubilee headquarters in Pangani is Ruiru’s Simon Kingara, Gabriel Kago(Githunguri),Jonah Mburu(Lari),James Kamau (Kabete), Patrick ‘Jungle ‘ Wainaina (Thika Town) among others.

Similarly a number of aspirants for various seats are also eager to run on Jubilee ticket which is seeking to add more members to its ranks rebrand and speed up party nominations in preparation for the August-slated polls.

Some of the former MPs in the region who feel they were shortchanged by Deputy President William Ruto in the 2017 Jubilee primaries have ganged up and have joined the ruling party in large number ready to reclaim their seats.

Also in the queue for Jubilee tickets are Kariri Njama and Susan Waititu who lost by a narrow margin in Kiambaa and Juja respectively in the by-elections last year.

“After the PG meeting we have been receiving numerous calls and visits by those who were initially hesitant in using the party ticket. We welcome all those ready to come back home on realizing that the party stands for democracy and we guarantee them a free and fair nominations unlike in UDA where they thought it was a smooth ride but they have realized it is now full of sharks,” said a source at Jubilee headquarters.

The source said as of Friday over 200 aspirants for various political seats had requested to be included in the aspirants’ lists.

It also appears even some UDA-leaning MPs and aspirants have developed cold feet following reports of Sagana III meeting which is set to rally the region behind Azimio coalition which many feel is set to complicate matters on the ground.

President Uhuru is set to conduct several rallies in his political backyard to explain to the people his achievement in the region for the last nine years, and to guide them ahead of the August election.

The planned visit has sent shivers especially on the region’s UDA proponents who do not know what the head of state is up to owing to his respected political acumen and mobilization skills.

This is after the party’s Parliamentary Group (PG) meeting held at State House on Friday gave President Kenyatta the green light to continue serving in his capacity as Jubilee Party leader.

Experts have also indicated that the NDC meeting will likely see Deputy President William Ruto stripped of his position as the party’s deputy leader.

“Those asking him(Uhuru) to remain silent in the coming election should now know that he is coming. He will not leave the country in the hands of bad people,” said former MP Maina Kamanda.

“He will not allow UDA to win any seat from the region. Those politicians who are rushing to join UDA will soon realise that they moved to the wrong side,” he warned.

Deputy President William Ruto has remained adamant that his Mt Kenya allies must fold their parties and join his new-fangled political outfit, UDA, if they are keen on working with him in the upcoming general elections.

However Azimio La Umoja leader Raila Odinga has been on a charm offensive of Mt Kenya where he has made major inroads bagging almost all governors. His open arms tactic to accommodate all parties has endeared him to the locals who have never voted for him in past elections.

This time, the region unanimously agreed to give him a hand with President Uhuru Kenyatta saying ‘yes’ to a Raila presidency.

The Jubilee PG meeting was a precursor to the party’s second National Delegates Conference (NDC) slated to take place on February 25 and 26 at the Kenyatta International Conference Centre (KICC) from 10 am. The party last held an NDC in 2017, prior to the year’s elections.

Kagure showers elders with praise for uniting and crowning a new patron, roots for youth mentorship

Moses Kuria blasts DP, says Ruto wants to take Kenya back to the dark days of one party state