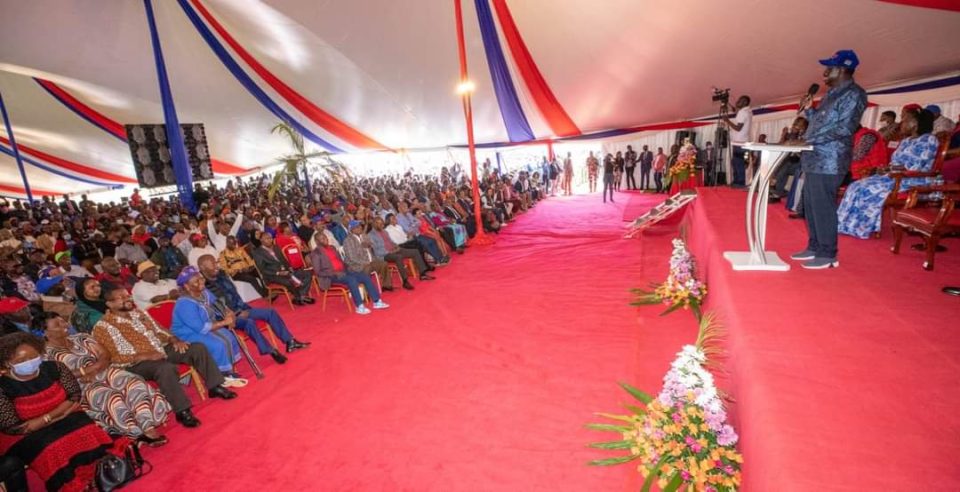 More than 3,000 traders and business people from 10 Mt Kenya counties have endorsed Raila Odinga and his running mate Martha Karua and vowed to campaign for the ticket in every village for an emphatic win.

Led by Gikomba Mitumba Clothes traders the business people said they are now convinced that it is only a government led by Raila Odinga that has a clean record and that can push Kenya to the next level.

During the meeting organised by Mt Kenya Foundation (MKF) and held at the Thika Greens Golf Club in Gatanga constituency Murang’a County, the traders said after Raila picked Karua as the running mate, the entire country sighed with relief and that the Mt Kenya ground has shifted in favour of the Azimio La Umoja ticket.

The traders operating under the Kenya National Chamber of Commerce (KNCC) led by their president Patrick Ngatia were drawan from all Mt. Kenya counties including Kirinyaga, Muranga, Kiambu, Nakuru, Laikipikia, Nairobi was also represented.

As part of their expectations from the Azimio government once voted in on 9th August 2022, the MKF requested Raila and Martha to prioritize restoring Kenya’s economy and lower the cost of doing business.

They also asked Martha to exercise her judicial competence to ensure that laws governing business operations will work to their favor.

“Martha Karua is the only presidential running mate who has the experience of working with all the arms of the government since she has been directly into the judiciary, legislature and the executive, and therefore as the Mt. Kenya Business Community, we believe in her ability,” said MKF vice chair Titus Ibui

The Azimio La Umoja’s Deputy President, Martha Karua assured the Mt. Kenya Business Community that the Azimio government will bring government service delivery at the grass root levels to avoid the necessity of people having to knock offices to acquire services.

“Economic restoration is ensuring that service delivery isn’t for a chosen few, but for every Kenyan. My boss Raila Odinga has consistently expressed his selflessness to the point of denying his own happiness for the sake of Kenyans’ freedom and justice where he was imprisoned for standing with the truth when everyone else relented with fear,” she added.

As part of the affirmation, Azimio’s presidential candidate, Raila Odinga said that one of the best methods of poverty eradication is empowering the private sector since it is the engine for economic growth. He promised that his government is going to create an enabling environment for the private business sector to thrive.

On his part Raila promised that his government would create the an enabling environment to allow businesses to blossom and in the process create wealth for the owners and the country at large.

Agriculture Cabinet Secretary who was present said Mt Kenya people are farmers and traders and once agriculture and business environment are sorted, they will be thrive and be happy.

He warned the people of Mt Kenya against associating with politicians who have been involved in ethnic cleansing – saying such people are a disaster to the country and should not be anywhere near power.

Kibicho dismisses DP Ruto’s rigging claims as baseless propaganda, says government has no capacity or intention to interfere with the general elections