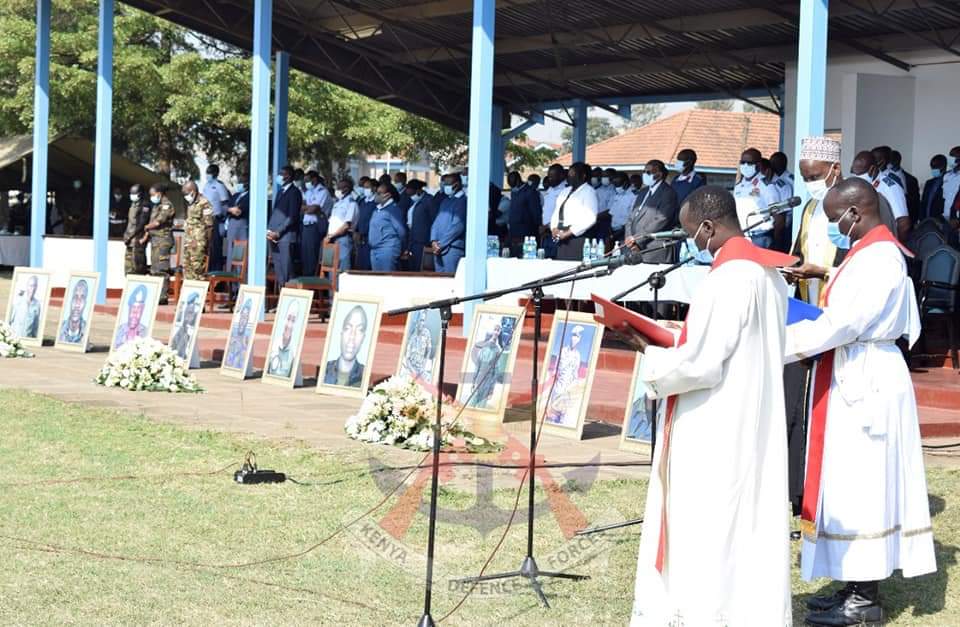 The helicopter that crashed in Kajiado killing 11 soldiers was in perfect condition when it left the base on a training mission, the Kenya Air Force (KAF) said on Thursday.

Speaking at the Moi Air Base, the KAF Commander Major General Francis Ogolla said that the ill-fated helicopter was in its perfect condition when it left the MAB for a regular training exercise.

While indicating that accidents do happen despite highest levels of competencies being deployed, the KAF Commander said that an inquiry into the accident has already commenced to establish what might have caused the crash.

He said the inquiry will help establish what can be done in the future to avert such accidents.
The MI 171E helicopter crash-landed at Ol Tepesi, Kajiado County last week killing 11 soldiers while 13 others survived the horror accident that saw the chopper burst into a ball of fire..

At the mass, Major General  Ogolla led the KAF fraternity sharing messages of condolences to the families and relatives of the fallen heroes who were present at the ceremony.

Major General Ogolla said it was indeed sad to lose such dedicated soldiers but urged the families to take heart during this sad period.

“I join you all in prayers as we console one another and pray that God gives strength to the families as we mourn and remember our departed loved ones,” said the KAF Commander.

He conveyed messages of condolences from President Uhuru Kenyatta who is also the Commander in Chief of the Defence Forces, Defence Cabinet Secretary, Chief of Defence Forces and Service Commanders among other friends of KAF.

He assured the families of unwavering support during this time of grief. “We will stand with you and offer every support possible. We have a welfare department to address all our concerns. It will hurt us to know there is a family of a fallen hero that is going hungry.” He added.

Bereaved Warrant Officer II Tarcisio Wandera, while speaking on behalf of the families that lost their loved ones said that this is a difficult time seen as a dream that they hope to wake up from to meet their loved ones.

“We received the news and we were shocked. We are trying to get used to the situation at hand. Those who came to break the news were good. There were counselors on the very first day and they kept walking with us each day.

You have given us a shoulder to lean on as you keep condoling with us. Our request is that even after we lay our loved ones to rest, we still need your assistance as we have young families who depended on the departed loved ones,” she said in her message.

Moi Air Base Commander Brigadier Peter Githinji passed his heartfelt condolences to the families saying the entire KAF family will continue praying for them as well as the colleagues who are still in hospital.

The prayers were conducted by the Kenya Defence Forces chaplaincy accompanied by hymns from the Anglican Church, St Peters Church on the Hills, Our Lady of Assumption Roman Catholic Church – MAB and the Kenya Air Force Band.

Present during the requiem mass were Major General (Rtd) James Aruasa, Senior KAF Officers, Officers, family and relatives of the deceased as well as Service Members.