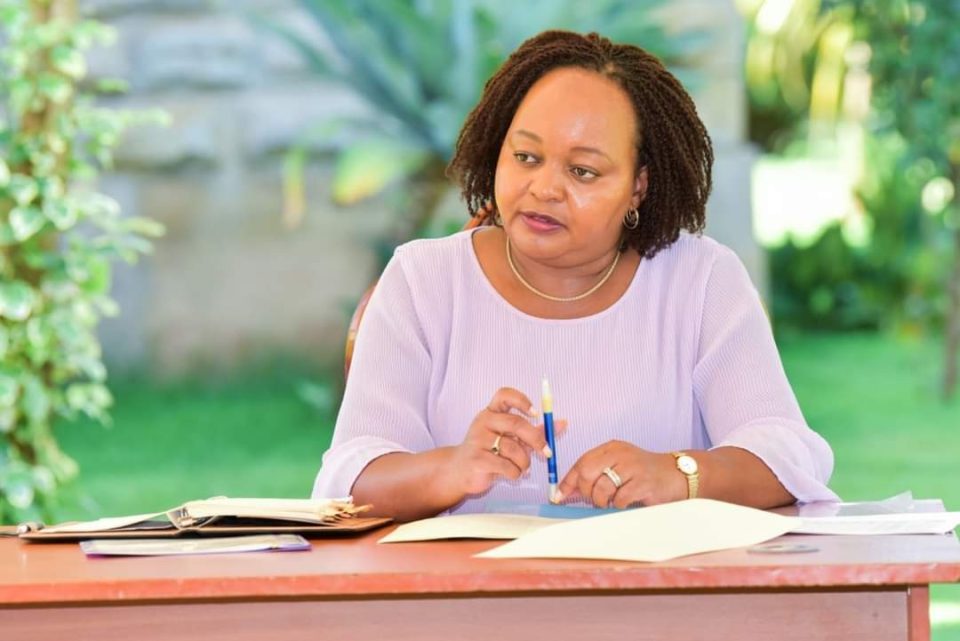 A report on compliance with Chapter Six of the Constitution by aspirants seeking elective positions in the August 9 general election has listed Kirinyaga governor Anne Waiguru among 63 gubernatorial and deputy gubernatorial candidates with serious integrity issues.

The ethics body wants all those with integrity issues barred from seeking elective positions in the forthcoming general elections.

And in a strange turn of events, EACC also wants Waiguru’s running mate – James Kinyua Mutugi – debarred on the basis that he did not resign from his position as Education CEC member in Kirinyaga County Government as at 9th of February 2022 in line with Section 43 (5) of the Elections Act 2011, where the aspirant is still working and on the pay roll as at 31st May, 2022.

Waiguru has been listed because EACC has already recommended her prosecution on abuse of office charges by irregular receipt of travel imprests amounting to Ksh 10,634,614/= for trips that were non-existent or not official.

“The investigation established culpability on the part of the aspirant and a recommendation to charge made,” says the report.

The report by Ethics and Anti Corruption Commission (EACC) sent to the Independent Electoral and Boundaries Commission (IEBC) lists various integrity issues touching on each aspirant as requested by the IEBC.

EACC in its letter says the aspirants listed have integrity, moral and ethical issues that IEBC needs to consider before clearing them to run for office.

“The Commission has, in light of the of the above said moral, ethical, integrity and other requirements, identified aspirants with issues relevant for consideration by the IEBC, as summarised as follows…,” said the statement dated 31st May 2022.

According to the report out of a total of 548 governor and deputy governor aspirants 61 have issues, while out of 575 senatorial aspirants only 6 have issues and out of 3,151 MP aspirant 58 have integrity and ethical issues among others.

With the intergrity report out which bars impeached or convicted people from vying for State Office, all eyes are on the IEBC to see how it will deal with the individuals mentioned.

The report is signed by Twalib Mbarak who is the chief executive officer of the EACC.

Drama as Gatundu residents ask President Uhuru Kenyatta to forgive them for being misled to insult him, deride his impressive development record

Only the presidential candidate who publicly declare support for ‘BBI’ will get support from Mt Kenya, Kiunjuri states