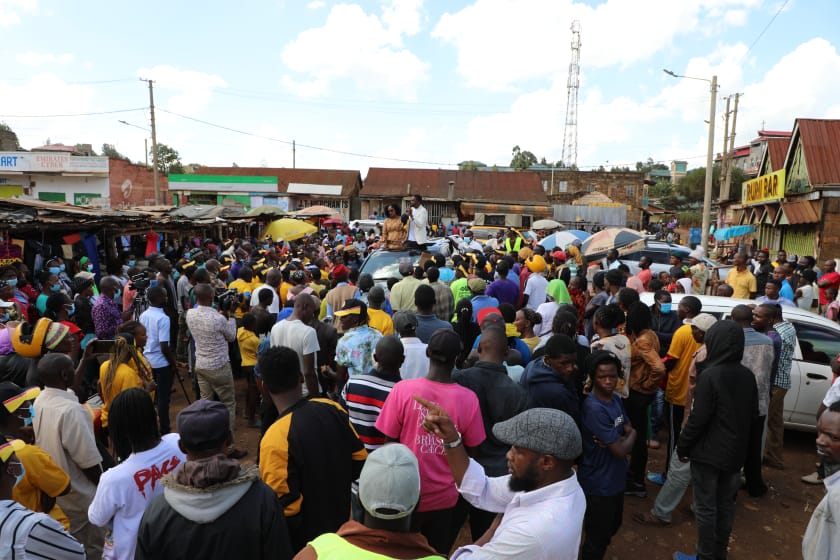 Former Cabinet Secretary and The Service Party (TSP) leader Mwangi Kiunjuri has warned presidential aspirants traversing Mt Kenya that there will be no automatic support as there are no longer free votes from the region.

Kiunjuri who has since dumped DP William Ruto’s tanga tanga camp said presidential aspirants seeking votes from Mt Kenya must first show the size of the national cake they are going to offer the region – without which there will be no support.

He said the Mt Kenya community will weigh its options on who to support based on the size of the national cake that the region will be guaranteed.

Speaking in Mwimuto market in Kabete constituency, Kiambu County, Kiunjuri said that this is a critical period, where decisive actions must be taken by Mt. Kenya region, in order to bargain what the mountain gets after the elections.

‘’If it gets to January before Raila, Ruto, Mudavadi and other presidential aspirants tell us what we stand to gain by voting them in, then we are cooked.’’ Kiunjuri said.

With close to eight million votes to dangle, Kiunjuri says the region must enter into a binding memorandum with presidential aspirants before casting their votes, a document that will include details of how much resources will be channeled towards improving the living standards of residents.

‘’We must be told how our coffee sector, poultry farming and other sectors of our economy will be made better we are farmers.’’ Kiunjuri said

However, the TSP leader warned the mountain region against voting based on political parties’ euphoria, but rather examine individual track records.

‘’If we present to you aspirants who you think are non-performers, do not give them your votes. Vote for people who will stand to be counted. Leaders of integrity, people who will work for you.’’Kiunjuri said

With Mt Kenya not producing a presidential candidate, the region has become a fertile hunting grounds for aspirants who are seeking to succeed President Uhuru Kenyatta who is retiring at the end of his term in 2022