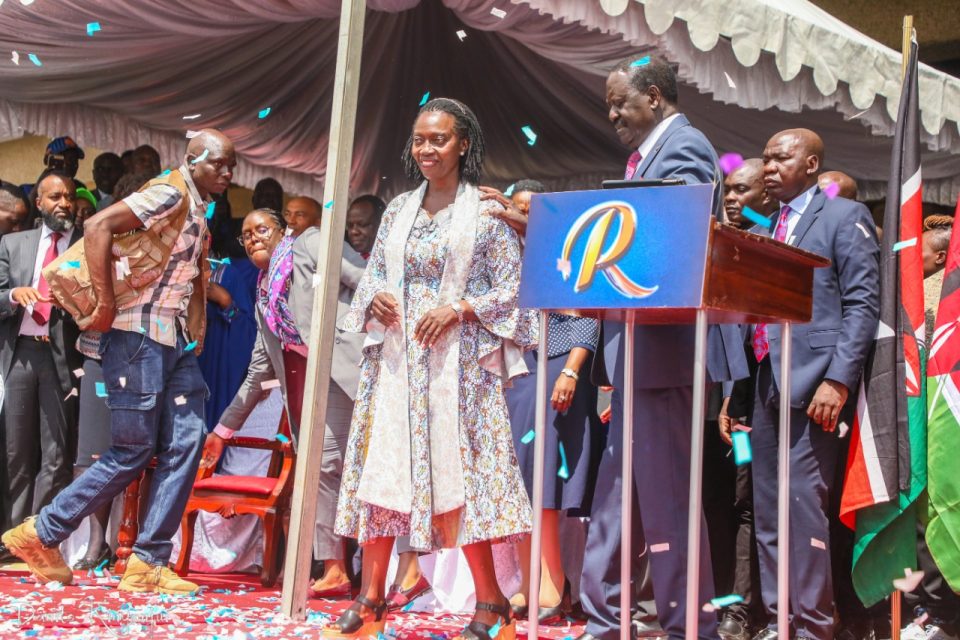 Unprecedented celebrations rocked the entire country after “Iron Lady” Martha Karua was unveiled as the running mate to Raila Odinga who will be flying the Azimio La Umoja Party flag in the August 9, presidential election.

Emotional scenes were seen across the country from capital city Nairobi and across all the 47 counties where women could not hide their joy as they witnessed history in the making as Karua becomes the first woman to be nominated for the Deputy President seat.

There were scenes where both women and men shed tears of joy when Raila Odinga made the announcement on Monday afternoon at the historical Kenyatta International Conference Centre (KICC) in Nairobi.

The Raila/Martha ticket was deemed as the most progressive and reformist as it rekindled the 2002 National Rainbow Coalition (NARC) that swept the dictatorial Kanu regime out of power and ushered a new dawn for Kenya.

Political observers immediately declared the ticket as the cleanest and what Kenyans deserve and need at a time when corruption is still rife in government and practiced at the highest offices.

In her Central Kenya backyard, news of the nomination of Karua was celebrated across her home county of Kirinyaga with residents thronging major towns with song and dance.

It was the same case in Nyeri county where news were received with jubilation where in Mweiga town,Kieni constituency women who had gathered together to follow the live announcement broke into songs and dance while carrying posters and placards as they sung songs of praising women leadership.

Pauline Gichuki a woman leader described Karua as a woman of standard who defied all odds to scale to greater heights and played a major role in the making of 2010 constitution.

“Every little girl dream of becoming a great woman who will positively impact the Society.A woman will proudly display the scars she got while trying to make the world a better place for the next generation.
Martha Wangari Karua is a woman of Standard who has fiercely defended the constitution of Kenya.
Congratulations Martha!!” She said.

Lilian Wanjiku a nominated MCA in the county assembly of Nyeri representing women also said that women who are young in politics have had their hope renewed as they have seen and witnessed Karua grow to a great woman who can now fefine the politics of Kenya.

She also said that with Martha Karua being in higher leadership, women rights will now be defended.

Taita Taveta county first lady Stella Samboja said that they are certain that Karua will restore the dignity of women in the society.

“I am a believer in women leadership, I believe in women sitting on the decision making tables, Karua’s nomination means a lot to the women of this country and globally. The plight of women will be heard and addressed by a woman like us who understands and has either been through it or knows what it means.

Nyeri town MP Ngunjiri Wambugu said that there is no comparison between the Kenya Kwanza Running mate Rigathi Gachagua who is a first time Member Parliament to the Azimio la umoja’s Martha Karua who has over 20 year of experience in the public sector.

“Gachagua and i are first time Mps in the National assembly and he has never been elected as a vice chair of any house committee.How would he compare to Karua 24 years experience in public service” He posed.

This was replicated across all counties including her home Kirinyaga where grand homecoming is planned for Tuesday.

CS Peter Munya launches the Potato Task force, says crop is the second most important in Kenya after maize

A zebra jumped over my car, an excited WRC Safari Rally driver reveals, vows to come back

Painful days ahead as super petrol price rises by Sh 20 to retail at Sh179 up from Sh 159, as Ruto backtracks on subsidy