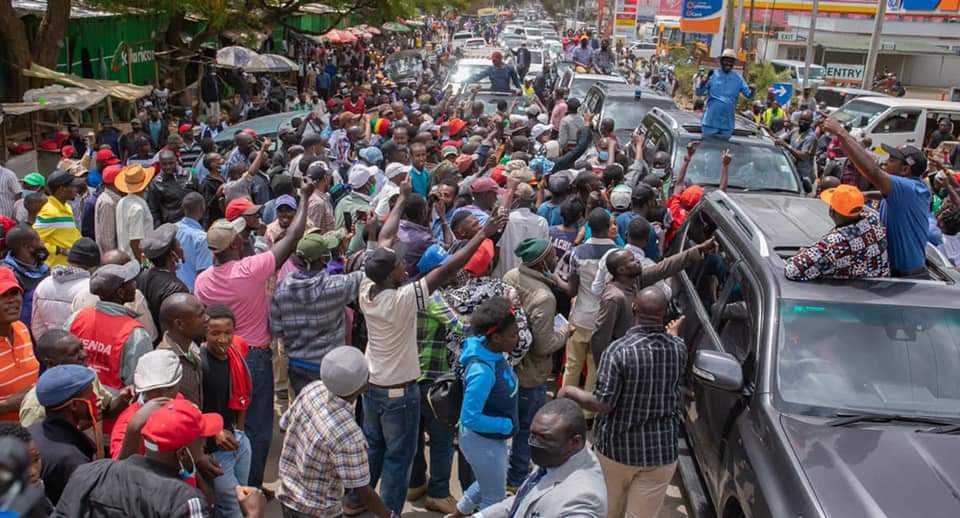 Raila addressed enthusiastic crowds in Nanyuki town after holding a meeting with the youths, traders and attending a church service accompanied by several prominent personalities from Mt Kenya region.

Even though he was not accompanied by politicians as he toured Nanyuki town, the warm reception he received left his detractors with homework today as they had claimed that selling him in the region was a difficult task.

“I have come to Nanyuki. I came yesterday. Some said Raila cannot climb the mountain. Have I climbed the mountain or not?’’ Raila chided his critics amid loud cheers from the people.

Politicians allied to DP William Ruto has claiming that selling Raila in Mt Kenya would be difficult task but the events of Saturday and Sunday will leave them scratching their heads.

It was another successful outing to Raila who had the previous day attended an Akorino Church convention Gilgil where the faithful promised to back him for presidency in 2022.

Raila asked the people to support him saying he would bring the third and final liberation to the country that would result in an economic boom where young people would getter good jobs.

He said his mission was to unite the country with Siaya Senator James Orengo saying that whenever the Mountain (Mt Kenya community) and the Lake (Luo community) worked together, great things happen

Attacking the bottoms up economic model being propagated by Ruto and his United Democratic Alliance (UDA) party, Raila told the young people not be swayed by empty rhetoric and mere political sloganeering saying what they need is good jobs and not just anything.

Raila said he had a great time hanging out with young people adding that he was very impressed how the Laikipia youth laid out their challenges and the comprehensive discussions on solutions.

Nairobi City County gubernatorial Agnes Kagure aspirant who accompanied Raila to the youth forum said it was her desire to see the youth get support both in terms of skills training and mentorship so that they can realize their full potential.

Support Muturi or we exit GEMA, threaten Kiraitu and Mithika