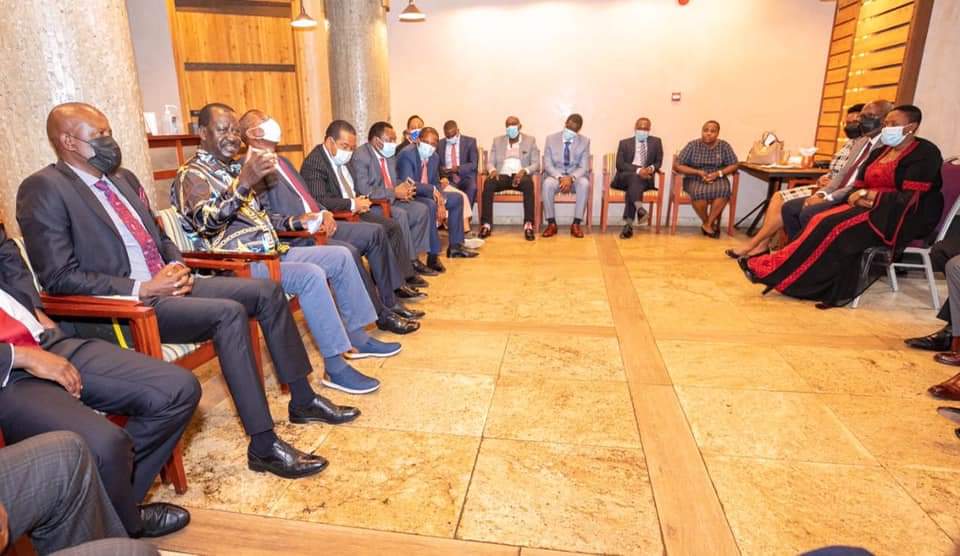 Political fortunes for ODM leader Raila Odinga were on rising trajectory this week after he got the much sought after endorsement by the Mt Kenya business moguls a day after he made a successful excursion in the mountain.

To add more sweeteners, Raila was the next day tagged along by President Uhuru, when the Head of State went to open dispensaries in Kibra where the two “brothers’ were warmly received by dancing supporters.

And in what appeared like a tacit endorsement of Raila, President Uhuru who praised Raila for the handshake, introduced him to the crowd asking them whether they will make the right decision and support the ODM leader.

The crowd answered to the affirmative and at that point President Uhuru invited the ODM leader to address the huge crowd gathered.

The next day on Thursday, Raila was again meeting 25 Central Kenya MPs for breakfast at the Serena Hotel in Nairobi where they promised to help him “climb” the mountain.

It was a dramatic increase in numbers of Central Kenya MPs supporting the ODM leader because, when he started his Mt Kenya tour in Naromoru, only area MP Kanini Kega was present and when Raila started drawing huge crowds along the way many more joined in.

By the time Raila reached Githurai, at the border of Nairobi and Kiambu, a massive crowd was waiting for him and the number of MPs grew to 8.

The next day when the MPs went to the Mt Kenya Foundation (MKF) meeting on Tuesday at the Safari Park Hotel, the number had grown to 13 and the next day a total of 25 MPs were present and they said they would help Raila win votes in Mt Kenya.

During the MKF luncheon, the businessmen told Raila they were interested in a leader who will continue with the growth momentum already set by President Uhuru Kenyatta.

They said they want a leader who will not disrupt their businesses and who will be committed to reviving the faltering agriculture and industries not only in Mt Kenya region, but the entire country.

And when he met the MPs, the legislators told Raila that they want a leader who will help them realize the gains that were contained in the BBI document that was frustrated by the courts.

They said they wanted a leader who will push for equal representation by ensuring that populous constituencies got their requisite representation and the one-man-one-vote-one shilling mantra to be implement.

The MPs said they had trust in Raila that having walked the handshake and the BBI path, he clearly understood the importance of the document and the need to secure the gains for the benefit of all Kenyans.