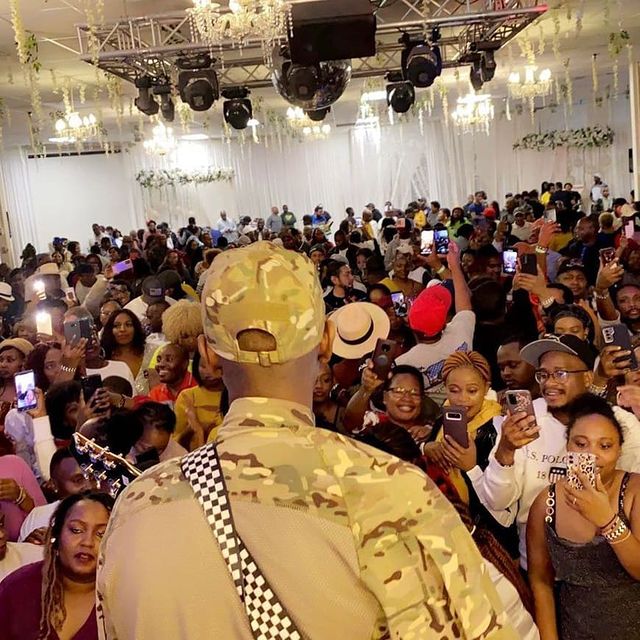 Kenyan Mugithi superstar Samuel Muchoki, popularly Known as Samidoh was on song literally as he delivered an electrifying performances in various cities in the United States where he thrilled thousands of fan.

Samidoh’s Sunday sterling performance tour in Seattle, Washington State was the talk of town that saw his Kenyan fans living in the US show up in large numbers to support the talented singer.

At the much anticipated performance Samidoh did not disappoint his fans as he stepped on stage while dressed in a combat suit, a popular army outfit and sent his fans into a nostalgic mood in a colorful Mugithi atmosphere.

A member of the disciplined forces, Samidoh told his fans that he wore a combat outfit during the show in honor of Kenyans working with the US army.

He concluded by thanking God, his fans, his sponsors and his drummer Waweru Uyu saluting him for the good job he did.

After finishing his performance, he said that his last show in Seattle overwhelmed him and they broke the record by their attendance.

According to organizers of the event that is sponsored by Jabali Entertainment and AMG Realtors the a titanic performance in Seattle city, state of Washington on Sunday left many of his fans asking for more of his hits.

The veteran singer had his last show on Sunday where he left his audience talking after an electric performance. As early as Saturday morning the tickets for the show were all taken

During his USA tour that started on November 2 that ends on Thursday Samidoh held more than 8 shows in the cities of Dallas, Houston, Boston, Birmingham, Atlanta, Seattle, New Jersey & DMV.

Samidoh has redefined the soundscape of Mugithi music in the last four years armed with his own tools of interpretation of the lyrics depending on his theme.

The soft spoken, ever smiling cop (as described by many fans) has risen from trenches to become the most formidable superstar of our age.  The unostentatious star has had other outside tours which includes Tanzania, United Kingdom, Dubai, Qatar, Bahrain and South Sudan.