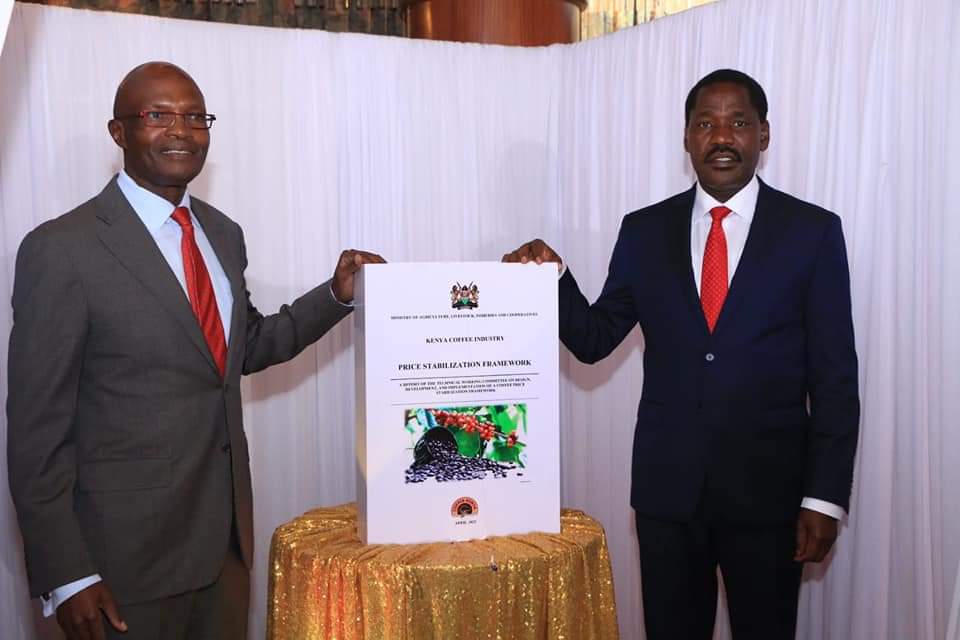 Key reforms in the coffee industry initiated by the Jubilee Government have led to a significant increase of earnings to farmers by 33% between 2014 and 2021 according to a report released by Agriculture Cabinet Secretary Peter Munya.

Munya said the prices are set to go even higher with some cooperative societies paying farmers Sh 127 per kilo of cherry this year – some recording up to an 80 per cent increase.

He gave the examples of Mucagara that has paid farmers at Sh 128 per kilo, Kanjuri at Sh 121 per kilo, Rung’eto at Sh 124 per kilo among others.

In spite of the great improvements the industry has recorded, Munya said middlemen and cartels are fighting back and slowing down the reforms.

Munya announced that the “coffee boom” was back as he launched the Coffee Prices Stabilization Framework at a the Safari Park Hotel in Nairobi.

He said the Framework seeks to address challenges in the Coffee Subsector in order to improve farmers’ earnings, improve foreign exchange, improve Food and Nutrition Security and create employment.

Munya noted that in the last two decades, the sub-sector has encountered several challenges resulting to drop in production; from 6kgs to 2kgs per tree. To stop the decline the government developed various interventions aimed at ensuring full recovery of the sub sector.

He said some of the reforms that have had a positive impact on the subsector include establishment of; Commodities Fund, Coffee Revitalization Programme, Cherry Advance Revolving Fund, E-Voucher Subsidy Programme among others.

He said that through the Ksh.1 billion Farm Inputs Subsidy Programme, out of 80,087 registered farmers, 59,000 farmers have already benefitted at a cost of Kshs 450 Million and that the coffee industry export earnings have improved by 33% between 2014 and 2021.

Martha Karua receives a major boost as Kikuyu elders endorse her as Raila’s running mate, say she is most qualified