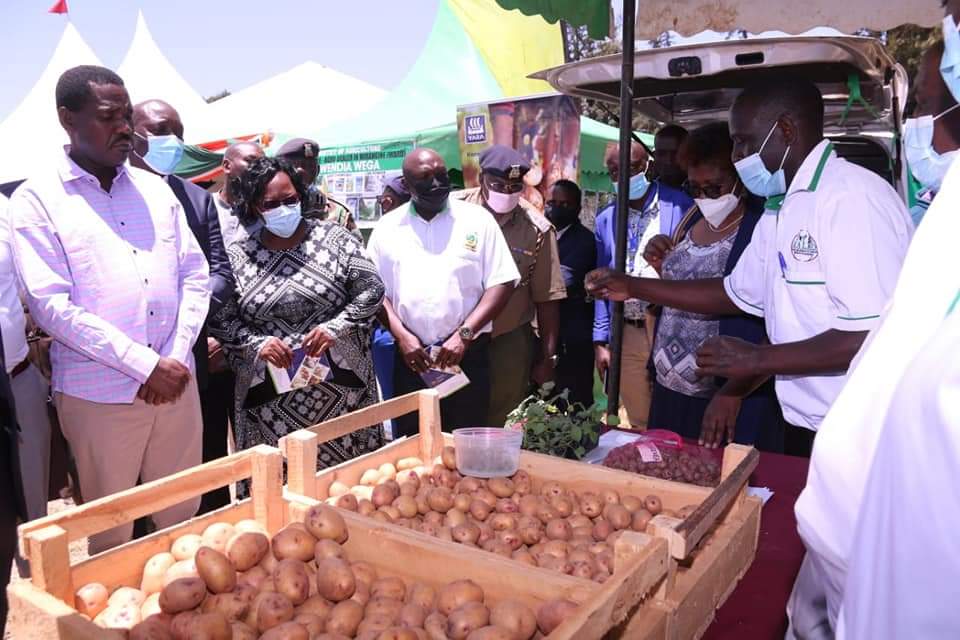 Munya said the program seeks to cushion small scale farmers that were hit badly by the Covid 19 pandemic across the country.

Speaking in Nyandarua county during the inspection of Olkalao Potato Cold Storage facility, CS Munya said once the multimillion facility is complete it will assist small scale potato farmers to add value to their produce.

“We are determined to bridge the gap of potato production especially at a time like now when our international partners have expressed an immense desire for local produce. The subsidy program aims to give small scale farmers alifeline despite the setbacks brought about by Covid 19 Pandemic,” Munya said.

The CS who was accompanied by Nyandarua Governor Francis Kimemia said once the facility is complete will cost Shs 100 million with the capacity to hold 100,000 metric tonnes of potatoes.

This is a step in the right direction as the country grapples to meet the rising demand for the commodity.
For instance Kentucky Fried Chicken (KFC), which operates in Kenya through franchise Kuku Foods East Africa has been importing potatoes mainly from Egypt for french fries, which are commonly known as “chips”.

KFC, unlike local restaurants, only accepts potatoes that have been peeled, cut to the required and frozen size for processing as chips.

CS Munya recently KFC, has identified farmers to grow the potato variety that they want.

Munya said the Ministry has already come up with a plan on how to grow those particular varieties that KFC requires.

This has been made possible thanks to the International Fund for Agricultural Development (IFAD) who are supporting them to start growing more varieties and ensure they have those that please the palate of those interested in KFC type of chips or french fries.

According to Munya, the Ministry of Agriculture has agreed to work together with KFC and have identified the people they want to work with to start rolling out the particular variety they require as well as relevant partners.

Munya noted that the real crisis in the potato sub-sector is supporting farmers to grow and deal with post-harvest losses and ensuring they reach the market.

In early January, the KFC franchise in Kenya reported that it had ran out of potatoes, a contradiction in a country where smallholder farmers grow the crop in tonnes but cannot properly access the market.

Jubilee Party is not dead and the campaign has just begun, declares President Kenyatta

Gorgeous City preacher Rev Natasha defends her ministry, says it is above board